Remember Flipper? Here is a beautiful collection of sound clips. 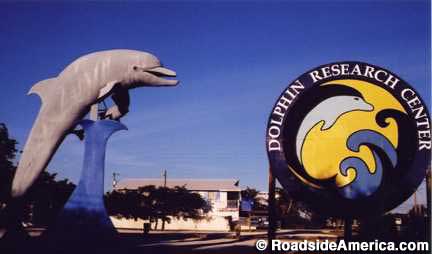 The final resting place of Flipper, TV hero dolphin of the 1960s. Or, actually, heroine dolphin.

Back in the early sixties, the DRC was known as Santini’s Porpoise School. It was run by Milton Santini, a pioneer in dolphin husbandry and training. Mitzi, who was Santini’s first pupil, was picked to star as Flipper in the original movie (with “Branded” heartthrob Chuck Connors), which was filmed at the School.

It may shock some to learn that Flipper was a she, although a male stunt dolphin, Mr. Gipper, did all of Flipper’s tail-walking (Mitzi never could master that trick). Nevertheless, the dolphin who nudged wayward boats to safety, knocked guns out of poachers’ hands with well-timed leaps, and warned Bud and Sandy whenever danger lurked, was a lady.

Two hours south of Miami on US 1 is Grassy Key, a subtropical island in the heart of the Florida Keys. At mile marker 59, on the Gulf side, stands a 30-foot concrete statue of a mother and baby dolphin. This marks the entrance to the Dolphin Research Center, a serious-minded facility devoted to education and public awareness. It is also the final resting place of the most famous dolphin ever– Mitzi, better known to the world by her stage name, Flipper.

Mitzi’s lively screen presence made the film (and its accompanying TV series) a hit, and she became a beloved celebrity at Grassy Key. When she died, of a heart attack, she was buried beneath a dolphin statue in the School’s courtyard. The DRC maintains the grave, and in honor of her accomplishments, they always make it the first stop on the tour. A small plaque reads:

Dedicated to the memory of Mitzi
The original Flipper
1958 -1972

Mitzi left no progeny, but Mr. Gipper did. His daughter, Tursy, is also a fine tail-walker.